With the 2021 Six Nations in the bag, there will no doubt be multiple ‘best of’ lists in various newspapers and on countless websites in the coming days. None of these matter. The East Terrace Six Nations Awards are the only ones that do. Read them now and know that they are beyond scrutiny and utterly correct.

Foreshadowing of the Tournament 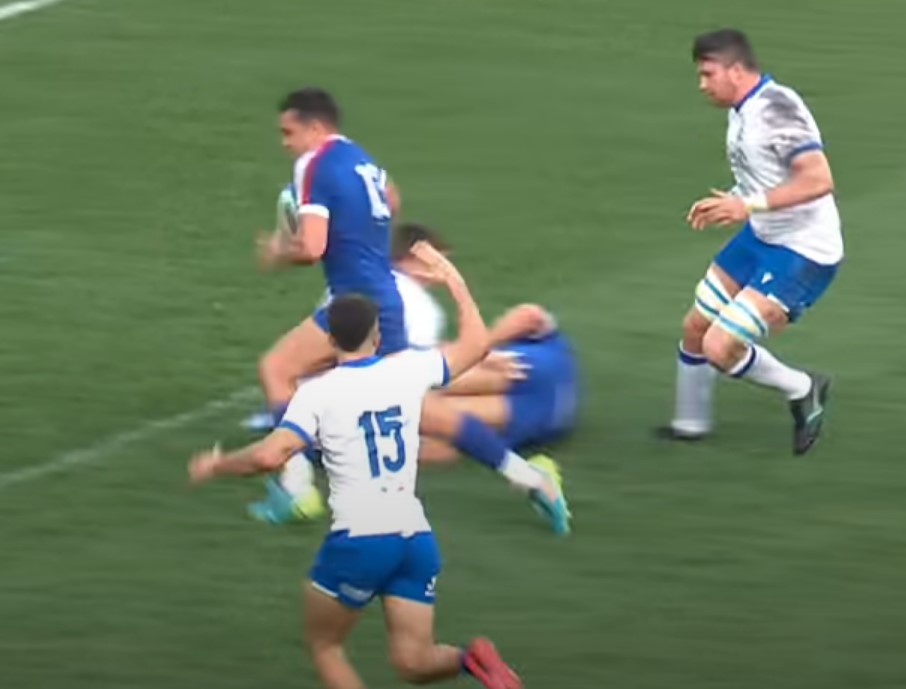 Italian full-back Jacopo Trulla made the most ‘visionary’ play of the tournament in the opening round against France. His slow and apathetic jog back as Arthur Vincent scored near the posts (complete with wave of the hand to incriminate others at the exact same time it dawns on him he should have sprinted back to try and make another tackle) encapsulated almost perfectly everything that was to come from Italy for the rest of the tournament.

We will be announcing the winners of our #SixNations 2021 awards this Saturday. Defensive efforts like this do not go unnoticed. Stay tuned. pic.twitter.com/Qh3qXnXzTY

Flick of the Tournament

☘️ Keith Earls is still up there with the VERY BEST.

The Union Flag gets less exposure at a UKIP conference celebrating the Queen’s birthday than Nigel Owens’ farm does in rugby broadcasting. It was everywhere. BBC, ITV, social media, YouTube, official World Rugby videos you had only clicked on to see law discussions…you simply couldn’t escape it.

Not even Twickenham had so much air time. You half expected the TMO officials to be based there for all games.

Louis Rees-Zammit can almost be given a lifetime achievement Mike Pyke Nonchalant Try Scoring Award already. But Wales’s Talupe Faletau deserves an honourable mention too. This is the expression you love to see after a try. 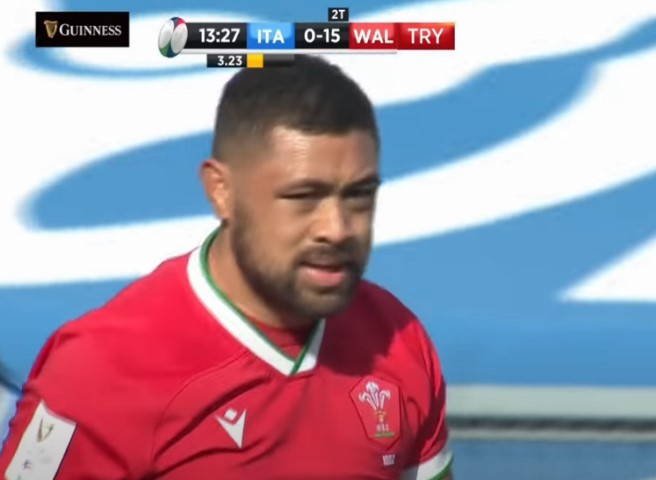 Clickbait of the Tournament

Mick Cleary’s ranking of the best and worst Grand Slams was a piece of clickbait a Buzzfeed intern would have blushed handing in. Headlined by the Telegraph as an article ranking every Grand Slam ever, it actually missed out the first 23 Grand Slams in tournament history. That’s right, 23. Lacking even the most basic research, it listed Shane Williams first try as his one against England in 2005 (it was actually his 22nd). England, of course, won most of the greatest Grand Slams in Cleary’s list. 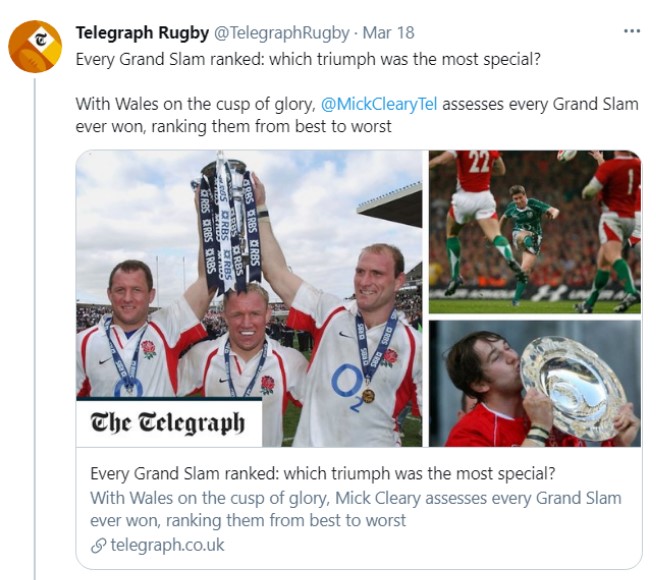 Even neutrals were baffled by the swashbuckling 2005 Welsh Slam being rated 14th of 19. Wales claimed four of the five worst spots, England three of the top five (two of which came in the early 1990s when Ireland and Wales could have been replaced by the San Marino football team with little impact on results).

In conclusion, the piece was a classic for the ages and is destined to be taught to future content creators as a masterpiece in trolling. Even Donald Trump would hesitate before pandering to an audience so blatantly.

Existentialist Moment of the Tournament 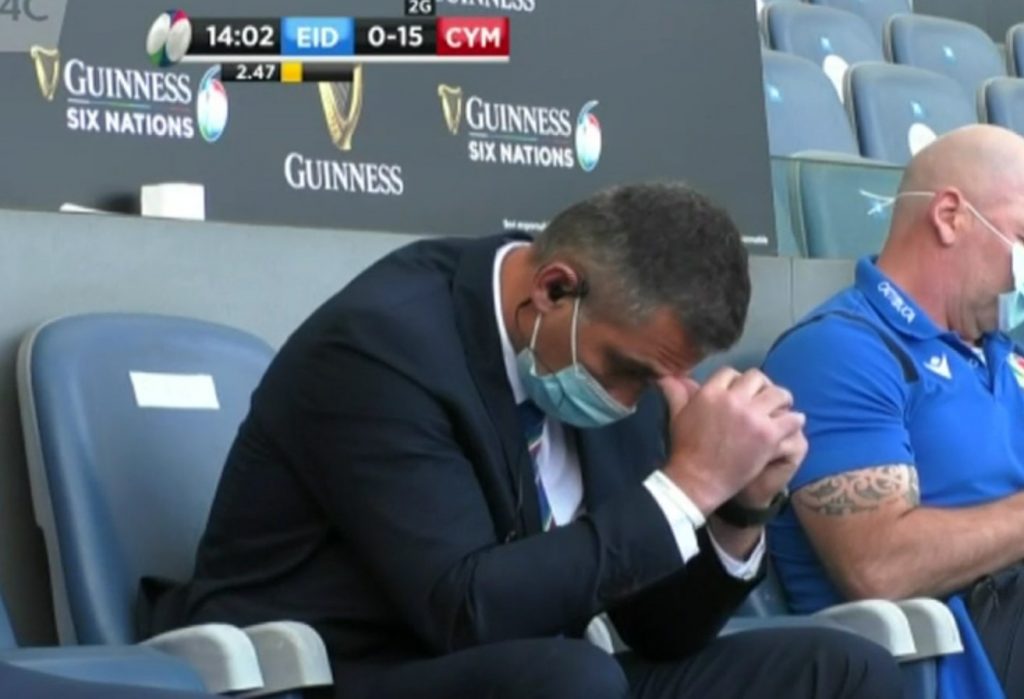 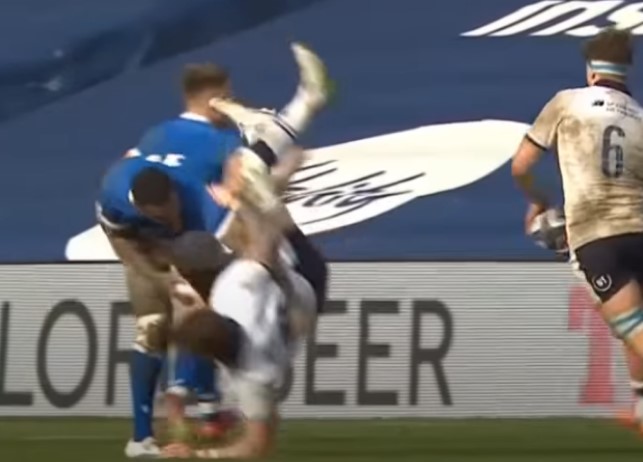 Italy’s commitment to making things worse almost has to be admired. Destined to lose their fifth match of the five game tournament, Italy were down to 14 men against Scotland after another yellow card. With the score at 38-10, Monty Ioane decided to carry out a random tip tackle off the ball for fun. No reason. Just for the heck of it. He was lucky to get yellow.

Moments later Michele Lamaro decides to carry out a pointless and reckless charge into a ruck without his arms. He probably only escapes a card from sympathetic refereeing. Both actions were shameful stuff in light of the situation Italy were in at the time.

Match previews and writes up of a game that are no more than thinly veiled (and lazy) Lions talk. Please, report on the game. Do the ‘My Patently Ridiculous Lions XV to Annoy You/Show My Lack of Understanding of the Modern Game’ drivel in a separate column.

Journalists and pundits talking as if anything any team does against Italy is anything to take note of. No, scoring lots of tries and running amok against the laziest and most disorganised defence this side of a Rudy Giuliani press conference does not reveal the flair and skilful side of any side.

Scott Quinnell loudly proclaimed Wales would be Grand Slam winners ahead of the tournament. What on earth was he thinking?

Scott Quinnell loudly proclaimed Wales would be Grand Slam winners ahead of the tournament. Had Wales taken the scrum on offer with around a minute left in Paris, this Oracle of Cymru would have been spot on. What insight!

Several journalists and pundits reacted to defending champion’s England’s home win over the French like Tonga had just beaten South Africa. This was despite France having failed to win in Twickenham against England in 16 years and all the main bookies having World Cup finalists England as marginal favourites. Good win? Yes. A shock in any way whatsoever? No. 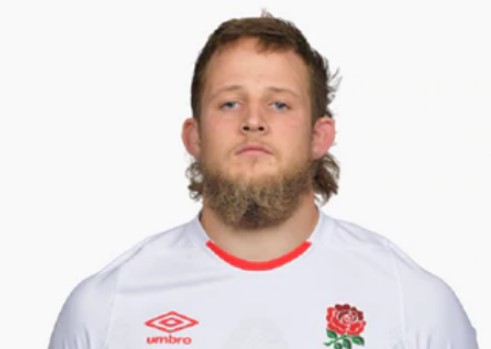 Quite why a sport so steeped in history attempts so few retro inspired kits is a mystery. England’s 150th Anniversary kit was a nice touch, as was the Red Rose used. It was a spiffing follow on from the kit England wore to celebrate 100 years at Twickenham in 2010. 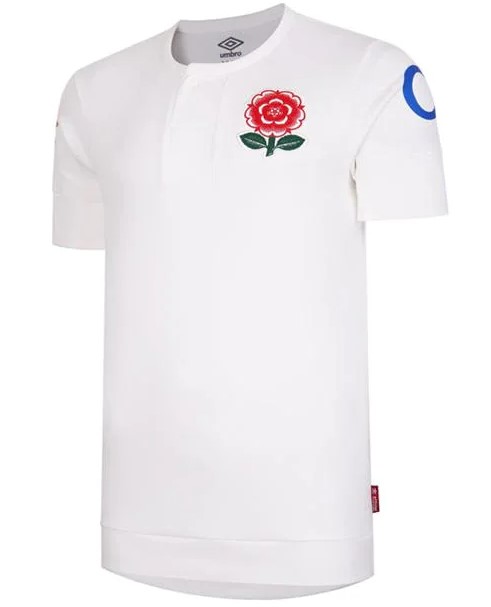 French tracksuit top (or is it an anthem top?). 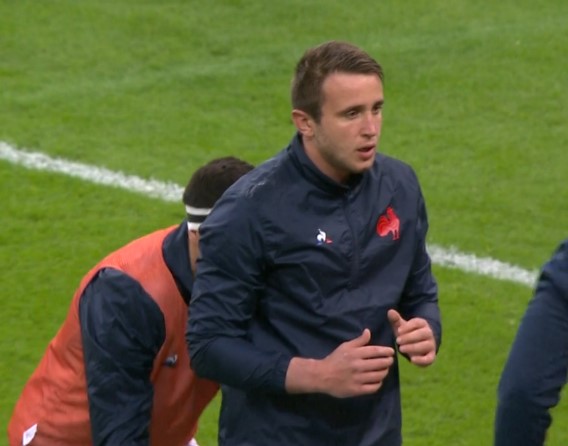 Sir Clive Woodward’s admission he doesn’t bother watching much domestic rugby to learn about the international players he is paid to analyse sums up the generally poor state of rugby punditry. You simply wouldn’t get away with it in the NFL or many other sports. Rugby should aim higher.

Doing the Basics of Broadcasting Award

Italy may not have done much right this tournament, but at least their broadcast crew show kick offs, lineouts and restarts. The BBC could learn a lot.

Most Cowardly Example of Doing Nothing

The tournament organisers’ failure to take French coach Fabien Galthie to task for his comment after one of his players was correctly sent off for contact with the eye of an opponent was cowardly in the extreme. 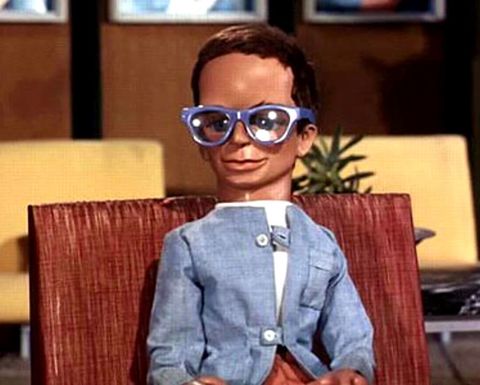 The Waffle Day Trip Organising Coach said: ” If you watch the Wales players, it feels like they specialise in making sure opponents get red cards.”

Lack of Self Awareness Award

Eddie Jones actually complained about negativity in the media. He may, possibly, have spread a bit in his time.

Food of the Tournament

Inspired by Jonny May’s celebration of a penalty (and previous over the top celebration of non-scores), The East Terrace hereby creates the ‘Jonny May Unnecessary Celebration Award’ as a counterpoint to our Mike Pyke Nonchalant Try Scoring Award. 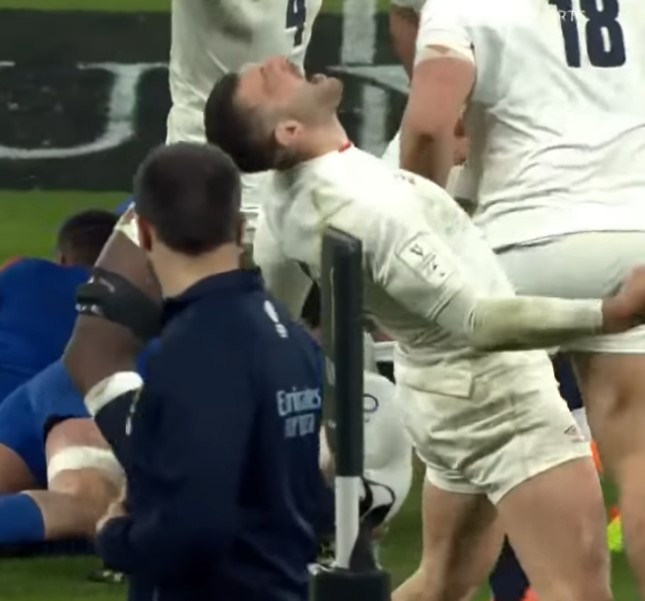 You can view it here (clip should be lined up when you press play):

Most Hilarious Reversed Penalty Cancelling Out a Silly Celebration Award 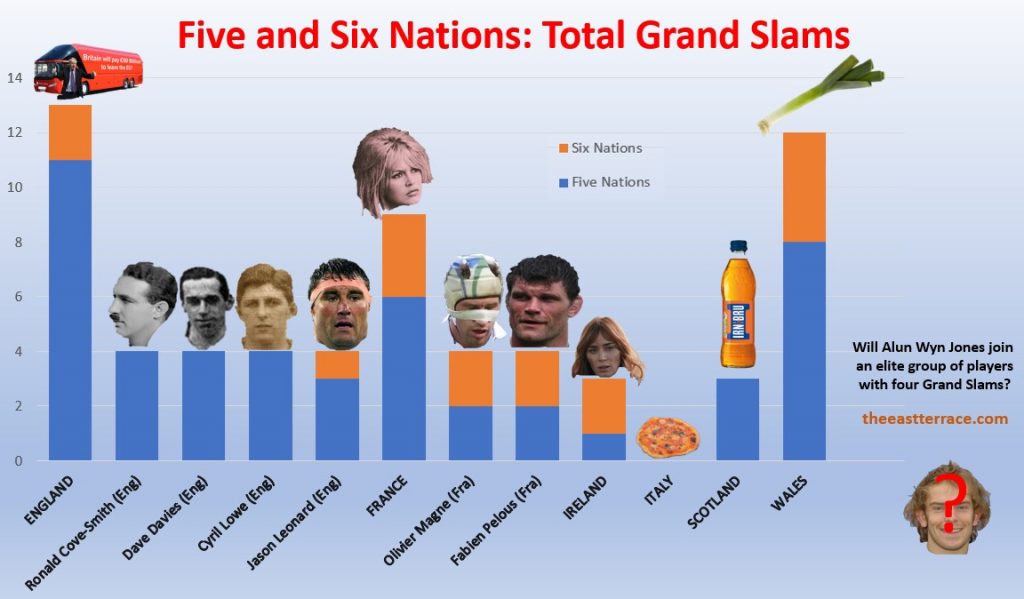 Most Common Question We Got From Football Fans

WINNER: “What, Scotland get a trophy for beating France?” 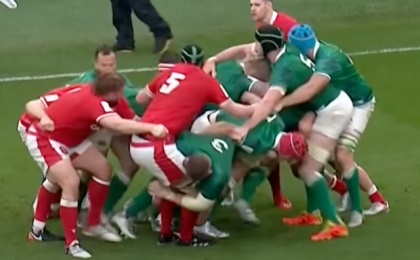 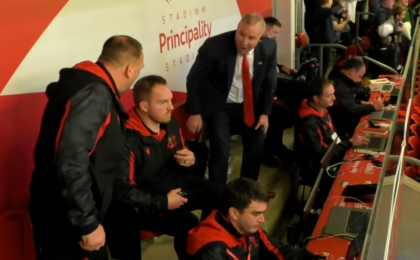